Well, I’m back again. Two years after writing Parkinson’s Much More than Just a bit of Shaking, World Parkinson’s Day has prompted me to write a bit more about my experiences from afar, watching my father move through the stages of Parkinson’s.

” It is not known what kills the cells, but this loss causes debilitating symptoms, such as tremor and difficulty in walking and moving.”
(Brain cell therapy promising for Parkinson’s disease, BBC News 11 April 2017)

When I see these simplified descriptions of Parkinson’s, I can’t stop thinking I should share a bit about what I saw my father go through, to add to the description of the disease.

Think about it. We are pure muscle. And Parkinson’s is caused by the deterioration of dopamine-making cells in the brain. So any function that includes using a muscle (speaking, swallowing, urinating, even breathing) can be impaired.

Parkinson’s gets worse with time and every patient will be different; some people will be able to hit on the right combination of medicines and be able to lead a more or less normal life. (For a simple description of the stages of Parkinson’s check out http://www.parkinson.org/understanding-parkinsons/what-is-parkinsons/The-Stages-of-Parkinsons-Disease )

All kinds of movements can become difficult: putting on your clothes, zipping up your jacket, going to the toilet, speaking, swallowing and even, when the disease has taken over, breathing.

Plus, all sorts of stuff starts to happen in reaction to the medicines you take to try to stop those symptoms. Hallucinations which separate your reality from those around you; dyskinesias, undulating movements that make you look like you’re drunk, increasing your feeling of isolation and inadequacy as people look at you funny.

The problem is that not all doctors understand the disease and so other complications are more difficult to address. When my father was at quite an advanced stage of the disease, taking pills every two hours, his retina detached. The eye surgeon briefed my mother and I on the operation and told us that, post-operation he would have to be very still, looking down most of the times.

“That’s going to be impossible. He’s got terrible dyskenesisas, he can’t control the movements.”

“Oh no, it will be fine, I know the movement of Parkinson’s patients, they just bob their heads up and down.” Yeah, right.

Well, in the end, that didn’t matter. Being off the drugs for his operation and not being able to swallow the ones that came after, threw him into a state of dementia where the dyskinesias were the last thing on our mind. (Needless to say the result of the operation was a disaster and he lost most of his sight in one eye…)

Degeneration of the Brain

And of course, let’s remember that although we first see how the disease affects our movement, we’re still talking of brain degeneration. And once the brain starts to deteriorate, we can loose our memory, our rational thought and even lose who we are.

But sometimes, the mind works in mysterious ways. The only thing my father could still do very, very well until quite late in his life was play chess. Amazing. He had limited reasoning, books and films could barely hold his attention, but he could play chess… and win! 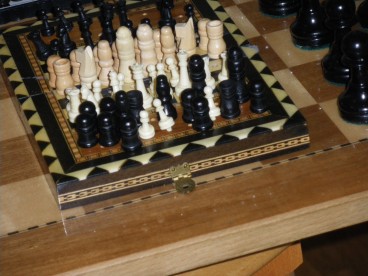 Having said all that, the advances in medicine are slowing down the appearance of symptoms and many people are well able to continue enjoying life. For example, my father was lucky enough to substitute his many pills for a Duodopa pump which gave him a new lease of life for a short amount of time. (You can read more about it here.)

But more than that. He was lucky to enjoy the full support, care, admiration and love of my mother (you can read more about her in “When I grow up, I want to be like her”)  , who in turn had the support of the Madrid Parkinson’s Association, where she’s still active as a volunteer.